Q is for questions? 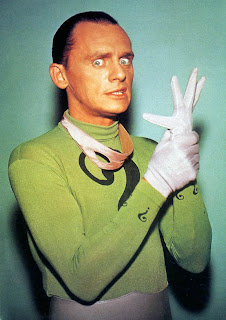 Were you aware of a comic book villain named the Riddler, whose garb always featured one or more question marks? Did you know that, on the campy 1960s TV show Batman, the Riddler, who was usually played by Frank Gorshin (pictured), was once played by John Astin?

Did you know that when you enter your link onto that Linky thing at ABC Wednesday, one or more of our team will come to visit your post? Were you informed that you should check the Linky link to make sure it works with your post? Have you read in the rules that your post should both mention ABC Wednesday AND have an appropriate mention of the week's letter, such as Q is for Quotations?

Am I excited to see what quaint, quirky items you are going to share this week?