W is for The Waltz. 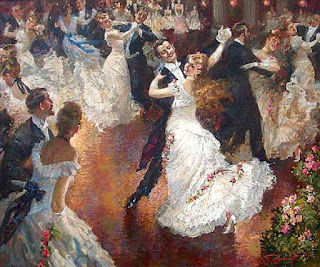 I love the Waltz,  It is the most elegant of dances and the first ballroom dance I learned as a child. 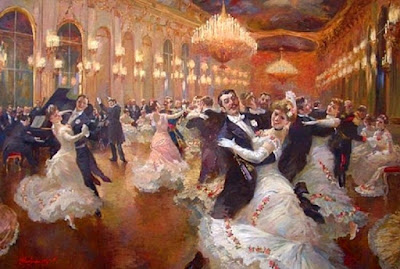 Sadly, through the fifties and sixties ballroom dancing was replaced by The Jive, the twist, the shake etc.  This was a rebellion of youth and I feel, stated  'We don't want to dance like our parents, we want to do our own thing.'  Anyone who indulged in Ballroom dancing was considered 'square' !

Who can forget the immortal scene from the wonderful musical 'The King and I', where Anna, the governess to the king's children, teaches him to Waltz,  in readiness for a forthcoming ball to be held at The Imperial Palace. 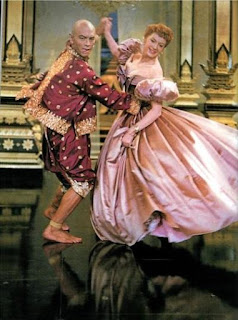 There is a more obscure musical by Rogers and Sondheim called, 'Do I Hear a Waltz'. 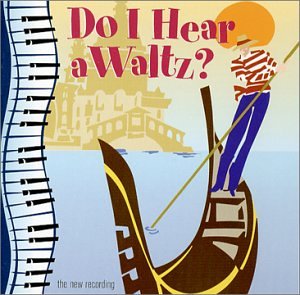 The story line was about an unmarried American secretary of a certain age, goes on vacation to Venice, where she falls in love with a married man, who has no intention of ending his happy marriage and family life, to be with her.

'Might it be better than never having loved at all'? 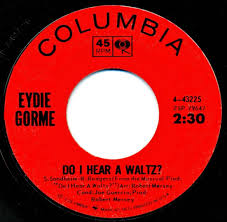 The title song of the film was recorded by many famous American singers including Peggy Lee and Eydie Gorme.

Sadly after several stagings and the film, it was never the success it was hoped to be. Such a shame as it had a good story line, fine actors and the greatest writers of all time.

Quite some time ago I was in a ladies choir and we used to sing many songs from the musicals including 'Do I Hear a Waltz?' I must confess to not knowing this song but our conductor had an uncanny knack of introducing us to quite a few obscure pieces which we grew to love, including this one !

We had a wonderful soloist called Edith who would sing 'Do I hear a Waltz'. She had a fine mezzo soprano voice and sang this song with such clarity and feeling that I often wondered if there was more to it than we knew, You see, Edith was a lady 'of a certain age' and had never married! We knew little of her private life as she was a very private person, who lived alone in a fine apartment with her much adored cat. Enrico.

I'd like you to read the lyrics of this most enchanting song and tell me if you hear a Waltz ?

Do I Hear a Waltz?

Do I hear a waltz
Very odd but true
There isn't a band
And I don't hear it at all.
Oh my Lord, there it goes again!
Why is nobody dancing in the street
Can't they hear the beat?
Magical, mystical miracle,
Can't it be?
Is it true?
Things are impossibly lyrical
Is it me?
No it's you!
I do hear a waltz
I see you and I hear a waltz-
It's what I've been waiting for all my life to hear a waltz
.
Do I hear a waltz?
Oh my dear don't you hear a waltz?
Such lovely Blue Danubey music
How can you be still?
You must hear a waltz
Even strangers are dancing now
An old lady is waltzing in her flat
WALTZING with her cat.
Roses are dancing with peonies,
yes it's true!
Don't you see?
Everything's Viennese,
Can't be you!
Must be me!
Do I hear a WALTZ:
I wan't you to share it 'cause
Oh boy, do I hear a WALTZ.

Did Edith hear her waltz and did she dance in her flat,
Waltz with her cat, ?

I heard my WALTZ when I had my first date with my husband Ian, I wasn't long divorced and had no intention of looking for somebody else. We went to our local WI Annual Christmas Dance, we had been introduced by mutual friends.. we chatted most of the night then,  the band struck up....would you believe, a WALTZ.. we danced all night and have been together now for 33 years...Yes........ and I still hear a WALTZ!

My apologies for such a long piece but I really couldn't leave anything out without telling the full story!
My sincere thanks to the WONDERFUL Denise for devising ABCW and the WORDSMITH Roger for his hard WORK in the admin of ABCW.